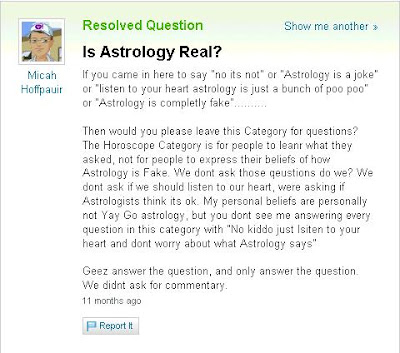 Dear Taurus: Yes, astrology is real. You asked this before when you started dating that cute but opinionated Aquarius, and now just look at what it's done to you.

If you'd like more information on what a astrological counseling session can do for you, or to inquire about my services, CLICK HERE. If you'd like a FREE (yes, FREE!) one-month customized forecast, send me your date, city, and (if known) time of birth.
Posted by Matthew The Astrologer at 11/20/2007 4 comments: 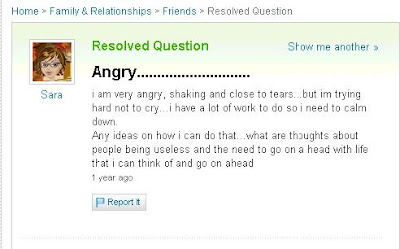 Dear Aries: There is no cause for alarm. It's only been 25 minutes since you called for that pizza, and if it's more than another five minutes, it's free.
If you'd like more information on what a astrological counseling session can do for you, or to inquire about my services, CLICK HERE. If you'd like a FREE (yes, FREE!) one-month customized forecast, send me your date, city, and (if known) time of birth.
Posted by Matthew The Astrologer at 11/19/2007 5 comments:

Pet The Goat: Be Nice To Capricorn 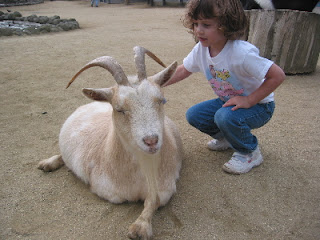 I've been looking at the upcoming planetary transits for the next few months. There's the usual mix of peril and opportunity out there, but I think I've already drawn one important conclusion:

Capricorn: you guys are going to get stiffed in the empathy-from-others department. Again.

Sure, the Sun, Saturn, and Uranus are all in helpful places for Capricorn right now. And even if they weren't, no one has a talent like Capricorn does for making things take root in the worst soil. But I've noticed over the years that if there's one Sun Sign that can get stiffed by transits and doesn't yell about it half as much as they should, it's the Goats.

Mars is going retrograde in Cancer... Capricorn's seventh house, ruling relationships. So while everything else appears to be working more or less on schedule, helping Capricorn build a solid, more reliable Tomorrow for Pluto to star screwing with next year... the love life appears to be lagging behind. This makes me a little sad, because I've always thought Capricorns were cute little things, like goats at the petting zoo. People generally agree with this assessment at first, until someone mentions bringing a goat home as a pet.

Seriously, though: I love you guys. Your just a sensitive as your opposite, Cancer, but manage to function in a dignified, orderly way... or at least you maintain the appearance of it, which is almost as good. On the inside, though? You're as messy as the rest of us... maybe a little more, because being a Capricorn is a little like being born wearing a pinstriped suit. You have the same needs as everyone else, but based on appearances, everyone assumes you showed up knowing how to change your own diaper. Efficiently.

Come to think of it, a lot of you out there look like you've got it together on the outside a lot better than you do on the inside. And that of course, is why I'm here.

.
If you'd like more information on what a astrological counseling session can do for you, or to inquire about my services, CLICK HERE. If you'd like a FREE (yes, FREE!) one-month customized forecast, send me your date, city, and (if known) time of birth.
Posted by Matthew The Astrologer at 11/14/2007 9 comments: 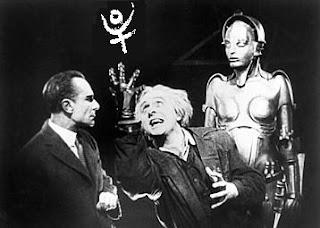 I've been following Pat's comments on the astrology of The Galactic Core (26-28 degrees Sagittarius) and what (if anything) is the significance of Pluto's prolonged stay there. I've always known it's significant, somehow, but I've always had a hard time pinning it down. Up until recently, the most I could get out of it was that it seems to appear a lot in the charts of science fiction and fantasy fans.

Current experience is teaching me the true meaning of this point in the sky, or so I think. Pluto is Transformation. The Galactic Core is, in a sense, the Center of everything in the sky, and thus astrology, and thus... life.

The planet of transformation is in a straight line with the Core. Connect those two points with a line, and that line proceeds straight to Earth. To you.

I normally take a very down-to-Earth, practical approach to astrology. After all, have you ever tried to "manifest" your way out of the ditch after a car has hit you? How well did that work? Frankly, in a situation like that, I'll take a decent paramedic over Gandalf The Grey any day.

But things are happening on a huge scale these days, for me and for a lot of us. So here is what I'm suggesting to all my dear readers and friends out there:

Today is not not a day to look at the sky and ask "why." Today is a day to look inward and ask "what do I want?" and be specific. Look around inside until you see the very specific, unambiguous details of what you really want.

Find that Truth, and shout it with all your might. Make a few demands. Stop taking prisoners.

Today: The Universe listens intently... so speak to it with Intent.

If you'd like more information on what a astrological counseling session can do for you, or to inquire about my services, CLICK HERE. If you'd like a FREE (yes, FREE!) one-month customized forecast, send me your date, city, and (if known) time of birth.

Crazy/Genius: Prince The Gemini Is Both 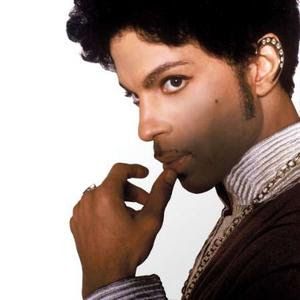 Although Prince (formerly known as Formerly Known As) has been on the charts since the early 1980s, he continues to produce the same thoughtful, introspective, wildly shag-worthy music he always did. Like many artists (Cyndi Lauper comes to mind), he has produced consistently excellent work, but mainstream sales haven't always reflected this.
One thing most people don't know about Prince is that he is, at times, a business genius as well. After all, only a lunatic would give away three million copies of his new CD with the Sunday paper in London, right? That's even worse than not selling albums... that's guaranteeing a loss. The same would apply just as surely to Prince, who did just that a few years ago. Except of course afterwards he played twenty one sold-out concerts in London alone as a result.

I don't know how much you paid for concert tickets last time you went... but I'm willing to bet our Gemini (June 7, 1958, 6:17 PM, Minneapolis MN) friend made a mountain off of money off the deal.

So I have to wonder what's behind Prince's recent unprecedented Internet rampage to eliminate all unauthorized images of himself and all trace of his music. Being worried about losing out because someone downloaded your song for free is one thing... but demanding a woman remove her home video of a toddler dancing to "Let's Go Crazy"? Jeez.

Prince has Pluto right smack on his Midheaven, opposite his moon. Right there we have a recipe for emotional volatility, and given the Midheaven's involvement, this is going to come out in the career. This is the sort of guy who can pull off a genius marketing ploy like the London giveaway. This is also the sort of guy who, at the peak of his fame, could suddenly change his name to a weird symbol with no proper pronouciation, thus leading to a spate of "The Artist Formerly Known As..." jokes.

Transiting Pluto is trining that natal Pluto/Midheaven now. Normally, most astrologers would say that this is a time when Prince would be making radical moves for the better in his career. Trying to get rid of every unauthorized trace of yourself on the Internet is certainly radical... but I wouldn't normally think that threating your biggest fans with legal action is so good for business. Then again, I would have thought giving your album away was nuts. Either way, the Pluto transit is adding plenty of fuel to the fire. In time, we'll see whether the Genius or the Lunatic wins the battle, this time around. Although with Saturn currently squaring his natal Mercury... which also rules his Eighth House Sun... and transiting Uranus squaring that Sun... I think the smart money may be on "lunatic."

Since it's pretty much impossible to find any Prince on the Internet these days, here's a squirrel on water skis:

If you'd like more information on what a astrological counseling session can do for you, or to inquire about my services, CLICK HERE. If you'd like a FREE (yes, FREE!) one-month customized forecast, send me your date, city, and (if known) time of birth. 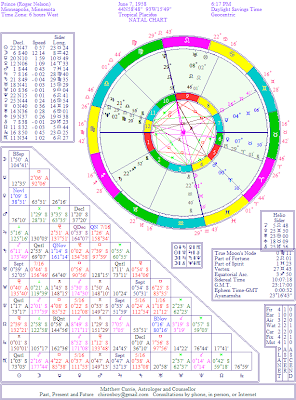 The Bull By The Balls: A Taurus And Scorpio Love Story For Everyone 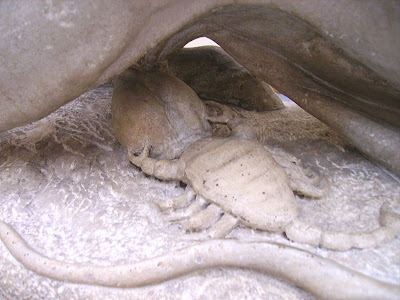 Above is a detail from a sculpture at the British Museum, depicting the legend of Mithras, who was the object of a Mystery Religion found throughout the ancient Roman world. In this legend, Mithras is frequently depicted killing a bull, and (in most cases)a scorpion is attacking the bull's cojones.

There are lots of places you can read up on the astronomical/seasonal significance of this central image of Mithraism. As an astrologer though, I have my own observations:

-It has been my experience that the upside of the legendary Taurus stubbornness is, literally, a refusal to die easily.

-Taurus and Scorpio are naturally drawn to each other, maybe more than most oppositions. Although one could make a case for that being because the signs are ruled by Venus and Mars, personally I think it's because both signs secretly love a challenge... frequently while they're complaining about how much they hate the challenge.

-Scorpios aren't afraid to go for the groin shot when it's going to score points.

Finally, and most importantly: those who seek True Love (or those who have It find Them) had better leave all their preconceptions at the door. You have some preconceptions about what sign he/she is, or his/her Moon sign, appearance, location, ethnicity, marital status, age, shoe size? Best give all those notions up now. When it hits, it hits.

And sometimes, if we focus on our preconceptions instead of what is True, it can be a huge pain in the balls. But it's always worth it.

.
If you'd like more information on what a astrological counseling session can do for you, or to inquire about my services, CLICK HERE. If you'd like a FREE (yes, FREE!) one-month customized forecast, send me your date, city, and (if known) time of birth.