The Hot, Semi-Nude Astrology Of Attraction 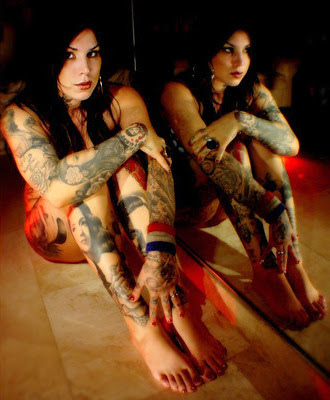 (You'll find all my new material, useful tips and a special deal on consultations at my new site, Matthewtheastrologer.com!)

One of the primary rules for attraction is that if there is an aspect between person A's Venus and or Mars, there will be social and/or sexual attraction.

An example: semi-famous and partly-clothed tattoo artist Kat Von D (born March 8, 1982 Nuevo Leon, Mexico) has her Venus at 4 degrees Aquarius... closely conjunct mine. Her Mars at 17 Libra squares my Mars. On the face of it, you might look in one of those supermarket checkout astrology guides and say to yourself: "Hmmm. He's a Sagittarius and she's a Pisces. He won't give her the time of day." Of course, anyone who knows me knows better.

When it comes to more general arousal, regardless of who (if anyone) else is "causing it" in you, you have to look at your own birth chart. Not just your Venus and Mars, but (at least as importantly) the rulers of your Fifth and Eighth Houses.

An example: My Fifth and Eight House rulers are conjunct. They were, in turn, closely conjuncted by the September 11 2007 eclipse I've obsessing over of late.

So, to summarize: Sex. It's great!

Okay, I'm done writing for the day. Time for some Youtube. I have important research to do on Venus conjunctions...


PS: Kat, if you're out there... I'll toss you a consultation for half price! Call now!

The Amazing Surprise Economic Turnaround Astrology Experiment continues! Click here to read more, and to join in!
Posted by Matthew The Astrologer at 9/20/2007

hmmmm....that explains something...my fifth house Gemini cusp ruler is Mercury and my 8th house Virgo cusp ruler is....Mercury...which is at 27 degrees Gemini conjunct my 26 degree Gemini South Node in the 5th house and my 1 degree Mars in Cancer...all being aspected by pluto and this week Mars....well you can imagine...

(Don't you just love it when astrologers talk dirty?) ;)

Hang on, I'm going to come in with my Saturn opposite at 24 Sag and pour cold water on this. And then move in with my Mars at 6 Cap opposite that Cancer Mars... if I can get past the comment moderation.

yuk, girls with tattoos... like old inmates. Nothing grosser, actually.

Jeez, doesn't anyone look at a woman's EYES anymore?

Can you please give me exact time when Kate was born??
I find she is so imteresting :)