Astrologers Doing Business In A Manger 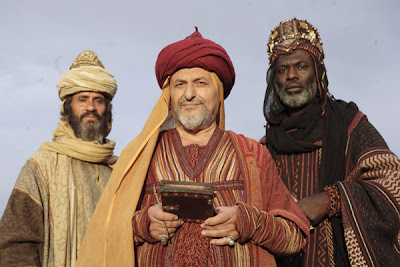 (It's Christmas re-run season, and here's mine. See you all in the new year!)


Scene: The Nativity. Caspar, Melchior, and Balthazar gather around the Christ Child. Mary and Joseph listen intently in the background.

Balthazar: ...my major concern with this birth chart is that it shows potential for conflict with authority figures. You might want to teach him to be a little more respectful of Caesar, just to be careful. At least publicly.

Caspar: Don't be silly. He's a revolutionary, and the world needs more of that. This Jupiter/Saturn configuration, though... could be liver trouble.

Melchior: Look at the stare on this kid. He probably has something we haven't even heard of yet, right on the Ascendant.

Caspar: (chuckling) You and your undiscovered planets, Melchior. Seriously.

Balthazar: I think what we're trying to say here , Mr. And Mrs...

(Looks back and forth at Mary and Joseph, who do not respond, but simply smile as if they know something the astrologers don't)

Balthazar: ...um, Carpenter, is that anyone born into this world has to cope with certain inherent limitations. And a birth chart is like a road map to all of life's obstacles. And emotional issues!

Balthazar: So you see, although it does appear that your boy here is, in fact, some sort of a really special person, the indications are of a shortish life span... like maybe 35 years tops. And it's going to be a struggle. Like with authority figures.

Caspar: No real signs of wealth here either. And possible death by piercing or blood loss.

Balthazar: So we really recommend relocating the birth chart. You should consider a move to Gaul, or Germania, or something.

Caspar: His relocated chart to Hispania puts Venus on the Ascendant. He'd be a lot more popular with the girls there.

(Balthazar and Caspar turn to Melchior, who has fallen silent, staring at the baby)

Caspar: Melchior, you've hardly said a word. By this point you've usually told the parents all about the baby's future marriage and food allergies. What's the problem?

Melchior: It's just... the way this kid is looking at me. It's like... it's like He Knows Something that we don't.

Balthazar: You're such a cut-up, Melchior. We're the Wise Men. We're astrologers!

(Caspar leans in close to Melchior)

Caspar (whispering): Besides, look around dude. The kid was born with the livestock. Everyone wants to think their baby is the Greatest Thing Ever... but this one is an obvious non-starter.

Balthazar: Sorry folks, we have to move it along here. The Moon's nearly at the Midheaven, and we have a party to work at Herod's.

This is priceless, Matthew!!

You should be writing for Saturday Night Live.

THANK YOU! You made my entire Christmas day a much brighter one. Snorting with laughter I am. Ditto on the working for SNL or Mad TV. You're a hoot and a holler. A real live one.

Happy hoidays to ya!
Pepper

I agree, that really was priceless.

Not entirely unrealistic either.