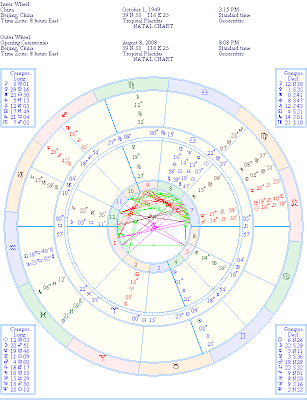 I'm not normally a big sports fan. Whenever I pay attention to these things, it's usually because of a scandal, or (as so many fans of auto racing are accused of) I'm just waiting to see if something disastrous happens.

That's why I'm going to be paying close attention to the upcoming Beijing Olympics.

The People's Republic Of China was born October 1, 1949 in a ceremony (according to Nick Campion) at 3:15 PM. Although these things are often tricky to determine, my reading and photos of the event seem to back that time of day. The Beijing Olympics are scheduled to begin with a ceremony scheduled for 8/08/2008 at 8:08 PM local time (any numerologists out there?).

In my time as an astrologer I've often been asked for the best date and time to commence an important venture. And, had China walked into a consultation with me a few years ago (which would require a much larger office on my part) about the timing of the Olympics... well, China has a reputation for volatile, so I would have quietly suggested going for another Olympics (2016 could be great!) and then subtly changed the subject to how great China was looking that day.

The chart for the opening ceremony, which according to astrological theory will set the tone for the entire Games, is a mess. A Mars/Uranus opposition in the 7th and 1st houses respectively, and Saturn smack on the 7th House cusp, ruling relationships (that is, with other countries), are not happy placements. On the other hand, an okay-aspected Jupiter in the 11th is good for Love Received. But with the Sun, Mercury, nodes, and Neptune all in the 6th and 12th Houses, I'm not optimistic about the overall outcome.

Consider, for example, the Sun, Mercury and Nodes in the 6th. The Sixth House is associated with health, the Sun and Nodes are malefics (at least in the Vedic system, and often pan out that way from the Western perspective too), and Mercury rules (among other things) respiration.

And the skies over Beijing are hot and dirty, and not the usual kind of "hot and dirty" I usually look for on the Internet either.

Furthermore, the chart for the Olympic Games doesn't work very well with China's birth chart either. A transiting Sun/South Node conjunction in China's 7th House is conjuncting China's natal Mars/Pluto conjunction there. The Seventh House usually represents marriages or major partnerships. In the birth chart of a nation, it means relations with the neighbors and with other nations.

Ask a Tibetan some time about how much fun it is to be "married" to the People's Republic Of China.

Also, transiting Jupiter is quincunxing that conjunction, and Neptune is opposing it. And China's natal Moon is untouched by any transits, except for a weak quincunx from Saturn.

So, my prediction? These Olympic Games could be the most entertaining yet. Not in the way sports fans would like it to be, though. But for jerks like me with a burn-on for totalitarian regimes? Oh yeah. There will be entertainment aplenty.

NEXT TIME: I confidently announce the date that the world DEFINITELY WON'T end on. Again.

If you'd like more information on what a astrological counseling session can do for you, or to inquire about my services, CLICK HERE. If you'd like a FREE (yes, FREE!) one-month customized forecast, send me your date, city, and (if known) time of birth. And it's accurate.
Posted by Matthew The Astrologer at 8/04/2008

May I suggest a link related to the Beijing 2008 Olympic Games?

Please let me know if you want a link back.
Many thanks for your reply.