(Predicting the future is inherently tricky, especially when there's a heavy Uranus involvement. This blog entry was written Sunday afternoon, and was finished literally minutes before the announcement that George W. Bush would not be attending the Republican National Convention due to the looming hurricane situation. Or maybe Bush has an astrologer who warned him about speaking in public tonight. Oh well... the article is written and I did predict weirdness for Bush this evening, so I stand by that. He may still very well appear at the convention via satellite or something, so keep an eye on the Bush situation tonight anyway. )
The 2008 Republican National Convention starts today in Saint Paul, Minnesota, and (like all political conventions) will likely be light on substance and heavy on cheering. Sure, there will be all kinds of talk about Vice Presidential candidate Sarah Palin, whom I don't want to speculate too much about without a proper time of birth or birth chart. All I know for sure is that, as mentioned in that blog entry... it looks to be a very Uranian election day.

(As of Sunday afternoon, the GOP convention web site still listed Sarah Palin as a speaker Tuesday, and "Republican Party's Vice Presidential Nominee" as a speaker Wednesday. Unless the Party decides that Ms. Palin has achieved full rock star status, I really doubt they're going to have her deliver two speeches two days in a row. Now that would be Uranian.)

I found myself looking at the transits for Day One, and noticed some very interesting things happening with George W. Bush. He's scheduled to be the keynote speaker tonight. Although I don't have a precise schedule, it seems likely he'll be speaking at about 8 PM local time. In a previous entry, I discussed the possibility that President Bush was drunk at the Beijing Olympics. There are similar things happening with President Bush astrologically today, with some interesting additions around 8 PM (St. Paul local time) specifically.

The major transits in place:

-Transiting Moon and Mars will be sextiling the natal Ascendant/Mercury conjunction in Leo, tending to make for a certain feistiness on George's part.

-Transiting Jupiter is opposing the natal Sun. Given the 12th House placement of the Sun, this can be a time of overindulgence in vices... much as was going on in Beijing. In addition, the secondary progressed Moon is almost EXACTLY squaring the natal Moon, making (once again) for emotional volatility. And remember... the Sun is the ruler of Bush's Ascendant, thus likely having an effect on visible, public behaviour.

-Transiting Saturn, now joined by the Sun, is still conjuncting the President's natal Mars. Mars is the ruler of Bush's Midheaven... his career and public image. Had you noticed that Bush's public appearances are down (and not terribly Presidential either) the last couple of months? The addition of the transiting Sun is likely to amplify this. For bonus points, Saturn is also conjuncting the secondary progressed Sun.

But now here are the transits happening for Dubya specifically in the 8 to 8:30 PM range tonight:

All of this makes for a fairly heady, emotional mix for President Bush this evening. Politically speaking, he's pretty much done. It's not like he could run again even if anyone  wanted him to. But as far as passing the torch to John McCain, tonight's speech is important. And given the President's personally stressful transits, I'd be a little worried if I was on McCain's team.

Now, I'm not predicting that George W. Bush will stumble on stage drunk or anything. But by the looks of it, his keynote address for the evening is likely to be... interesting. The kind of "interesting" that Fox News will likely gloss over and/or treat like it's The Gettysburg Address.

Other, more independent observers, are likely to have a different take on the matter. 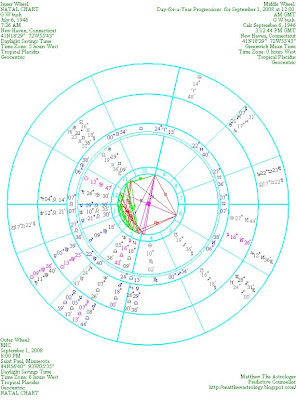