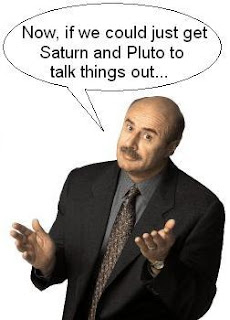 There's a bad vibe going around the set of The Dr. Phil Show these days. In the last three months, two members of the show's staff have died and two others have had medical emergencies... including the sudden and unexpected death of a young intern from a strep infection. All of this is happening during a "re-tooling" process to boost ratings, which have undergone a slow but steady decline from their peak a few years ago.
Not surprisingly, Phil McGraw's transits (September 1, 1950, 7:15 PM, Vinita, Oklahoma) reflect this. His Midheaven (public image and perception) is at 24 degrees Sagittarius, and is only now pulling out of a merciless four year off-and-on conjunction with Pluto. Transiting Uranus is currently conjuncting his Ascendant at 21 Pisces, and will be squaring the Midheaven off and on throughout the upcoming season. As for the most recent spate of unexpected deaths in the studio itself: these have all taken place while transiting Saturn has been conjuncting his natal Sun at 9 degrees Virgo. The Sun is the ruler of his Sixth House (work and daily details) and is also in the Sixth.

Furthermore, as the beginning of the new TV season approaches, Neptune is conjuncting the secondary progressed Midheaven. All of these bad transits appear to be piling up to make it a very difficult Fall season for Dr. Phil.

Two bits of good news for Dr. Phil: One, Pluto... which has caused so much trouble for him in past... is rolling into a sextile with natal Jupiter, the Midheaven ruler, and will over the course of the next few years trine his natal Sun and Moon. So, although things certainly won't be easy for him in the next few months, the long-term prognosis is good.

Secondly: you know if things go terribly wrong for him, he'll get a best-selling self-help book out of the trouble he's survived. He does, after all, have Moon in Taurus in the Second House... and if there's any placement that can find a way to turn a buck off of a crisis, that's it.

One more thing: Phil has Saturn smack on his Seventh House (marriage and partnerships) cusp. And who is that stern little gimlet-eyed woman staring at him from the audience all the time? Yup. That's Mrs. McGraw. 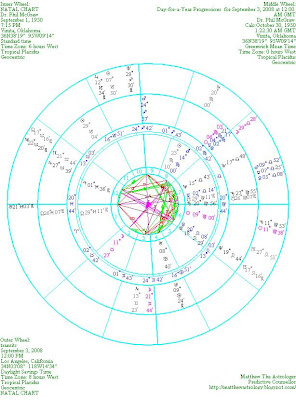 Do you think these transits have lessons for Dr. Phil to learn? I see he is now trying to capitalize on America's weight-loss issues...as so many others. It is too bad his "content" is so lacking. I suspect he could do so much better. For starters, there is so much need for more high-quality TV content like that found on PBS. An excessive love of money in America just overshadows too much of our culture. We get far too much mindles drool from our media.

You know (glancing around to see if there are any Dr. Phil fans listening)... the few times I've seen his show, it annoyed the hell out of me.

Mrs. Mcgraw looks like a man with her new surgery. Have you seen the current cover of the Ladies Home Journal with those two on it?

I do find him overbearing. Mind you I think that much of the public is over "healing"on talk shows anyway!

I cant slag them too much, though, because my Mum discovered talkshows in the 80s and it was the catalyst to her finally talking about her abuse and getting the psychological help she needed (she has Moon in Aquarius).

But, man, even SHE'S over it! This business is so old and tired.