Neptune In Scorpio In The Fifth: An Interview 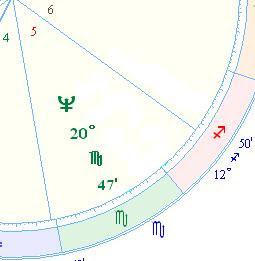 "And if you gaze for long into an abyss, the abyss gazes also into you."
-Friedrich Nietzsche

(Scene: An enormous, dimly lit warehouse filled with badly-arranged shelves stacked with a bizarre assortment of DVDs, books, and trinkets. At one end is a door, and at the other is a battered metal vault, held shut by a heavy iron bar. The smaller door opens and MATTHEW THE ASTROLOGER enters, carrying a note pad. At the centre of it all, in an arm chair, sits NEPTUNE IN SCORPIO IN THE FIFTH, glassy-eyed as he smokes from a bong, surrounded by a mound of clutter. He is on the phone, and talks loudly in order to be heard over a Warner Brothers cartoon which plays on an enormous television screen in front of him. He doesn't notice MTA entering.)
N5H: Bummer, dude. No, seriously. There's no way anyone should treat you like that. You were just -- (notices MTA has arrived) Whoa, gotta go. Astrologer dude is here. (N5H hangs up, and shouts to MTA.) Sorry I didn't hear you dude. That was Moon In Cancer. We trine each other almost exactly. That comes with free long distance.
MTA: I had to drop by. You keep missing your appointment. (glaring at the giant TV) Does that thing have to be on so damned loud?
N5H: Yeah, sorry about that. Have a look around, dude. Ask your questions... I'm not real good with answers though.
MTA: (Writing in his notepad) This place is a mess. Kind of interesting though. (Sees something on the floor) Hey! I haven't seen that since I was seven!
N5H: "The How And Why Wonder Book Of Dinosaurs"? Yeah. I've got it all here. Let Mercury and The Moon fight over who rules memory... I got your nostalgia right here, dude.
(There is a distant thumping sound)
MTA: What was that?
N5H: Nothing to worry about. (Turns the volume up on the cartoon a little) That'll take care of it.
MTA: You've got an amazing collection here. (Flipping through a few DVDs on a shelf) An awful lot of porn too. (excitedly) You've got this too? Man, those were good times!
N5H: Yeah. The relationship didn't work out, but it sure had it moments.
MTA: You've made me pretty unrealistic about those... relationships and romance and such. Always chasing after the wrong woman, or chasing after the right woman the wrong way, or -- (grabs another DVD off the shelf. A bag of pills falls to the floor) I'd completely forgotten about this one!
N5H: Yeah, that was quite the Salma Hayek phase you went through. See? I've even got your nostalgia for things that never really happened!
MTA: You know, I'm just not getting any work done here.
N5H: Work is for chumps, dude. Chumps! (Holds out the bong to MTA) Want some?
MTA: (Reaches for the bong, then stops himself) Nah. I've got a blog to write. (Accidentally knocks over a half-full bottle of Sambuca on the floor, which spills onto a stack of old comic books) This place is a disaster. But it's tempting to stay and hang out a while.
N5H: Pull up a chair! And about the cleaning: who do I look like to you, Saturn? If it feels good do it, I say. Cleaning? Doesn't feel good, so I don't do it.
MTA: I wanted to ask you about my ongoing insomnia issues. Normally a strongly-aspected Neptune would indicate too much sleep, if anything. But why --
(The distant thumping returns, a little louder. It appears to be coming from the vault door. The bar holding it shut jumps a little.)
MTA: Is there something you aren't telling me?
N5H: Yeah... I know why you don't sleep. (Looking at the television) The cartoon's over. (The enormous television falls silent, and it becomes apparent why it was on so loud. The metal vault door is being pounded on from the inside. A cacophony of sound issues from behind the battered vault door. Satan growls blasphemies. An air raid siren wails. The clown from Stephen King's "It" laughs menacingly. An angry Rottweiler snarls. Darth Vader's breath rasps. A bullying child taunts. Glass shatters as a head goes through it. A mocking SS officer shouts "Herzlich willkommen in Buchenwald, Zigeuner!" Each sound is distinct, yet melds into a whole: a sound like the hoarse shrieking of a baby left in a car with the windows rolled up on a hot summer day.)
MTA: What the hell...?
N5H: The Bad Things are here too. It's almost midnight. Time for them to come out. (N5H walks towards the vault and reaches for the bar holding it shut) Okay, okay, I know... you've been locked up for hours now. Hey Matt, you want to put another DVD in? I've got -- (N5H turns to where MTA was standing a moment before. He is gone, having run out the door he entered by. The notebook is abandoned on the floor.)
(Part of the "Personal Planets" series. Click HERE to collect 'em all!)
.

I have Neptune in Scorpio placed in 5th house. I must admit I adore watching movies and just about any type of artistic activity on the planet. Meow.

So bring over some beer and chips... and let's watch a movie, dude! But I will dust on the furniture and tidy up a bit. S'okay?

I believe your talent is not being fully utilised.

Smashing post...I am thoroughly enjoying this series. You rock!

I love this one!
The phone call to the moon, genius!

This is also an odd, inspiring post. I thought of what my planets would say and arrived at nothing, no conclusions, nor blurbs of anything sensible, until your post on Neptune. For some reason, I know EXACTLY what my Neptune in Capricorn in the 10th house would say for an interview.

Also, I never paid the outer planets any attention. I just feel like they are not personal, or "individualistic" enough since people my generation share its placement. I need to change my belief system.

NOTE: I won't be previewing my Astrologydating.com blog entries here from now on. Better get over there and subscribe to the RSS feed before you miss anything! Head over to astrologydating.com/blog and read the whole series... and ALL my new stuff... for free!

(The first episode of "Conquer The Universe With Astrology: The Radio Show" begins August 19th! Subscribe to this blog for further details... or find me on Twitter (@MatthewCurrie) or on Facebook! Hope to see you all there!)

One more thing: even if you aren't a big Facebook user, you may want to join the "Conquer The Universe With Astrology" page there.

All the updates, all the forecasts, all the radio show... all in one place!