Sarah Palin, Astrology, And The Art Of Public Speaking

Like many, I have just finished watching the biggest and most important speech of Sarah Palin's political career. I'm making an effort to weed out my political opinions here, so bear with me. I want to have a look at the actual astrological transits she was having at the time, and comparing them to what appears to be the initial reaction across the Internet... again, attempting to filter out political bias.
Part of the problem with this subject is that we still do not have a time of birth for Ms. Palin. It was announced only last Friday that she would be John McCain's running mate in the 2008 Presidential Election (more on the strange astrology of Election Day here), and since then it's been pretty much non-stop shenanigans around Sarah Palin. The issue of the parentage of her son/grandson Trig Palin still hasn't gotten any closer to resolution (my astrological comments here.)

(Strange thing: you'd think that producing birth records would clear up the motherhood issue fairly quickly. Why hasn't that happened yet?)

Since then, there has been even more craziness, including an investigation into a misuse of her powers to get her former brother-in-law fired, and allegations of a connection between Ms. Palin and/or her husband and the Alaska Independence Party, which promotes secession from the country Ms. Palin wants to be Vice President of now.

Even though we do not yet have a time of birth for Sarah Palin, it's always possible to do a rectification. It would be a mistake to do this based on just one event... tonight's speech included... but her performance could give us some vital clues.

Interesting note: Transiting Venus-Mercury-Mars at 5-10 degrees Libra aren't aspecting anything in her chart, other than a very weak opposition to her natal Venus. But without a proper time of birth we can't be sure they weren't doing something to her Ascendant and/or Midheaven, or Moon for that matter. Either way, it's quite a heady mix of transits, as one might expect.

The expected digs at Obama were delivered as anticipated, as was the cheerleading for John McCain. And Palin's speechwriters don't seem to have heeded Democrat criticism that the Republicans have had nothing much to say about the economy so far. Initial response on the Internet seems mostly divided along partisan lines, which to me indicates neither great success or failure.

I know that if I express any personal opinion on her performance, I'll be criticized for my political viewpoints... whatever those may be. Here goes anyway: I think Palin generally acquitted herself well, but still needed to make a stronger impression than she did. There were no major stumbles or screw-ups, though.

Based on the transits happening at the time, I would hazard that Palin has a Aquarius/Leo Midheaven/IC. The squares to the natal Mercury didn't help any, and under the circumstances she could very well have done worse. But given the Jupiter support to Uranus (ruler of Aquarius)... that's another vote for an Aquarius Midheaven.

So, my educated guess? I suspect a morning birth for Sarah Palin, giving her moon in late Capricorn. Quite possibly Taurus rising, which would move Saturn into a nice place house-wise, in Vedic terms. And whether you like her politics or not, you have to admit she's got nice skin and cheekbones, implying a well-placed Saturn.

There. Was any of that too political for you...? 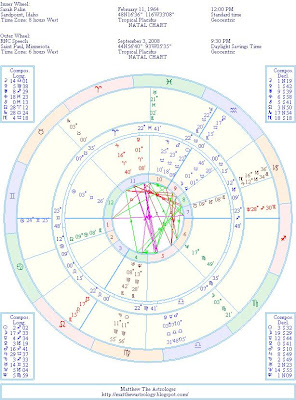 It was as always, interesting, wit, intelligent and quick ;)
tx

I don't think I've ever seen a better example of a Neptune transit in action. With her natal Sun-Neptune square, the projections, illusions and general Neptune weirdness is in full spate. People from both sides of the spectrum are going nutz over their expectations for this woman. Aren't American politics great?!

Personally I vote for specific issues on the candidate's platform, otherwise my little Libra mind would be totally fried by all this hoopla. Since I've been pro-choice all my life and very Socialist in my views, it makes this easy.

I would venture for the Cap Moon as well...that seems fitting for her.

As for the birth certificate thing I felt like she threw her daughter under the bus instead, and thats not NICE.

ps- did you read anything about the sperminator?

Have you seen where Eric Francis is using 4:40 pm? This gives her a Leo ASC with her lion's mane of hair, beuaty pageant past, and need for applause and approval - 'natural leader' and all that...I'm just now working with this chart (and wish i had time for rectification work which is fascinating)and wouldn't be surprised if a birth certif time shows up eventually. jude

NOTE: I won't be previewing my Astrologydating.com blog entries here from now on. Better get over there and subscribe to the RSS feed before you miss anything! Head over to astrologydating.com/blog and read the whole series... and ALL my new stuff... for free!

(The first episode of "Conquer The Universe With Astrology: The Radio Show" begins August 19th! Subscribe to this blog for further details... or find me on Twitter (@MatthewCurrie) or on Facebook! Hope to see you all there!)

One more thing: even if you aren't a big Facebook user, you may want to join the "Conquer The Universe With Astrology" page there.

All the updates, all the forecasts, all the radio show... all in one place!